It is heartening to hear that the Eurozone seems to be dragging itself out of recession, growing by 0.3% for the first part of the year, ending 18 months of decline. Unsurprisingly Germany was a key driver of this growth.

What’s more, it is oddly shocking that European banks outperformed European & global stock markets by 3.3% since July. “Why?” is the question which springs to mind for many. Well, there is investor demand for assets in the Euro area in general, which seems to be cascading down to the banking sector. This coupled with repaying European Central Bank (ECB) loans promptly, has boosted the standing of the banks. €1tn in cheap ECB loans were lent under the longer-term refinancing operation (LTRO) in December 2011 and February 2012, to ease a liquidity crunch and are now starting to be paid back to the tune of about €325bn. It is this, which has  beaten market expectations and injected confidence into the sector.

In Spain for example, the largest banks, Santander and BBVA, seem to be valued cheaply, but their large international businesses mean they are not so over-reliant on just a Spanish domestic recovery. Their smaller rivals, such as Banco Popular and Banco Sabadell, which did not expand into Latin America during Spain’s property bubble, have more lowly valuations, but on the upside, could be first in line to ride on a Spanish economic recovery.

Overall things have improved in Europe since summer 2012, when fears of a Eurozone break-up reached fever pitch, before Mario Draghi, the European Central Bank (ECB) president, promised to do “whatever it takes” to save the currency union.

Although challenges still lie ahead, Eurozone banks will need another €2.9tn of deleveraging by 2018 to meet Basel III capital and leverage ratio requirements, according to RBS. This in turn means less lending, which is not so good for European property investors.

European property – where’s the link with banks and the economy? 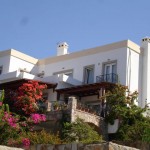 The International Monetary Fund (IMF) foresaw economic growth returning later in 2013 (albeit small) to Europe. This in turn seems to be helping the European property markets.

Global housing and property markets have enjoyed their best performance since the boom years of 2006 and 2007, during the 2nd quarter of 2013, according to GPG, with property prices rising in 30 of 42 housing markets around the world (using inflation-adjusted figures to provide more comparable data across countries).

Although some European property markets still have negative price growth, there are some which are beginning to take off.

Turkey’s house prices, on the other hand, are rising strongly (yes it does often get counted as European). House prices in the country rose by 6.94% year-on-year in Q2 2013 (inflation-adjusted), after annual growth rates of 8.13% in Q1 2013. Turkish property prices performed better during the year to Q2 2013, compared to a year earlier.

So the European property markets are showing a mixed performance, with Greece and Cyprus struggling, which would be expected, but others are levelling off and even looking buoyant in a handful of countries.