It’s been a while since I have visited Krakow and my, how it has changed…and yet…. how it has not changed a bit. The first obvious change is the amount of roadworks and infrastructure changes.

Around the main train station there is major upheaval with the tramlines being upgraded so that they can run quicker, more efficiently and also extend out to the West of Krakow, with plans to reach the airport Krakow Balice. This North West part of Krakow is serviced currently by trains, buses and taxis. 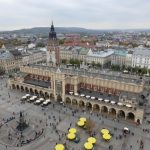 Then there are the plans to reduce the amount of the traffic around the main square, the Rynek Glowny, which is a tourist magnet. A square of 200m x 200m, it is the biggest Medieval square in Europe and one of the biggest in the world. And then there are the relatively recent additions like the Tauron concert arena, one of the largest and most modern in Poland.

The city dynamics are intriguing, with an official population of about 750,000, the city feels very full. Not only is this a University City with numerous students – many of whom may not be officially registered – much the same as anywhere in the world. In addition the city attracts about 7 million tourists per year, swelling numbers almost tenfold. Perhaps it is for this reason the city feels ever more cosmopolitan and international in nature.

There is also the Bernatek footbridge joining the world-renowned Kazimierz- the Jewish district – with the leafy pretty suburb of Podgorze.

So road, tram, amenities and bridge improvements are building momentum.

What about the authentic and the old Krakow?

Well all of the profound depth of history, architecture, culture, customs, and traditional Polish cuisine, remain preserved. With the biggest, oldest, European market square at its heart, this city oozes history. So much so, that the whole of the city centre is a UNESCO world heritage site. Imagine, a whole city centre.

The three areas attracting protected status are the city centre with its numerous historical houses, palaces, churches, and the oldest, international Jagiellonian University, surrounded by the remnants of the 14th-century city fortifications.

The former Royal residence Wawel castle and the Gothic cathedral where the kings of Poland were buried, have protected status. Majestically located on the banks of the Vistula (Wisla) river, the longest river in Poland, shared with the capital city Warsaw where it flows through further downstream.

Not to mention the medieval site of Kazimierz with its ancient synagogues in the southern part of town, the delectable Kazimierz with its quirky and trendy coffee shops, ridden with tourist troupes bouncing around from synagogue to Oskar Schindler’s factory, and back to its graceful squares.

The same value-for-money food and drink can still be found alongside a great mix of shopping, from international brands to local craft ware, priced in zloty and so untouched by the euro exchange rate dynamics.

In fact it has also been claimed Krakow has a jazz scene to rival that of New York’s. Surprising? Well when you start to visit some of the jazz bars and venues, from Harris Piano Jazz bar to Piano Rouge, then you begin to comprehend the realism of this statement.

If you want to hear more about what an investment in Krakow can mean for you, then please get in touch to chat it through.