The UK, and the way it is viewed by the world, is going through change. Yet many fundamentals remain about the investment prospects of its key cities.

Cities that have performed well since 2007 are London, Cambridge, Oxford*, with steady house price rises, buoyed by the micro-economy of the South East of the UK, coupled with low interest rates. But as we know future growth is not the same as historic. Some of you like to invest where it seems safest, so London may fulfil lots of those criteria. 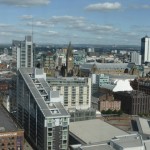 Given there will be a future economic focus on the North and the Midlands, aiming to spread the country’s wealth more evenly, Manchester will benefit. It is one of those cities which has been experiencing steady house price growth, yet has lots more future potential. Why?

Economic and property momentum are more likely to come from cities where house prices have been experiencing steady growth  but where economic factors — low mortgage rates, low unemployment and rising wages — set the conditions for stronger price rises.

Manchester has been voted a top investment city°, for good reason, whether that be on a buy-to-let or PBSA basis (Purpose Built Student Accommodation). A booming micro-economy is driving demand for quality residential accommodation. It is not just city workers who want to live in the centre but its loyal student population as well, enticed by its jobs, sporting facilities and media and digital businesses.

Why invest in buy-to-let property in Manchester?

With 2.73 million people living in the Greater Manchester area, of which 1.76 million are of working age (16-64), it is a micro-economy to be reckoned with.

Education: Greater Manchester has one of the largest student populations in Europe. There are around 96,200 people studying at five Higher Education Institutions and more than 20 universities within one hour’s drive of Greater Manchester, with over 400,000 students. The University of Manchester is one of 11 UK universities in the top 100 globally.

While less than half its students come from the north-west, 7 in 10 stay after graduation, usually in Greater Manchester. This is an important driver of local housing demand.

Sport: as well as big clubs like Manchester United and Manchester City, the area is home to major sporting companies such as Adidas and Umbro and national organisations such as British Cycling. This sporting prowess attracts major Middle Eastern investment which has a positive knock-on effect on the local economy. The sector employs 18,100 people, generating annual GVA of £0.33 billion.

Manchester is familiar with infrastructure upgrades and major overhauls. One of the biggest  regeneration projects was the overhaul of Manchester Victoria station, which reopened in October 2015. The £44 million refurbishment resulted in three new tracks and four new platforms. It has also been 20 years’ since a bomb set off by the provisional IRA wiped out half a mile of the city centre. Since then, billions of pounds have been spent on turning Manchester into the epitome of a 21st century city, with outstanding results.

As improvements have taken place, demand for housing has been driven up. The renovation of the city has transformed the housing market with sold prices in Manchester’s city centre increasing by 7% in 2015.

The success of this North Western city, dubbed the Northern Powerhouse, has sparked a recent trend in investors, especially those from overseas, looking outside Manchester’s centre to the neighbouring area of Salford Quays, seeking to replicate the achievements of central Manchester’s property market. But the centre still has lots more to give, with prime locations being used inventively.

Meanwhile the city’s thriving lettings market has been recognised by HSBC as one of the UK’s top ten buy-to-let hotspots, recording the highest yields in the UK between 2010 and 2015 at 6.02% per annum. And property prices are forecast to rise 20% over the next 3 years.