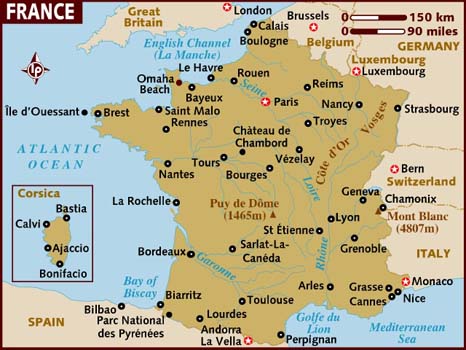 France, in Western Europe, offers lots of property investment opportunities, from Medieval and port cities, to the mountains, Mediterranean beaches, all covering a rich history from Roman times to the intrigue of the Palace of Versailles, not to mention the wine regions in between.

Its capital, Paris, is famous around the world for its couture fashion houses, art museums like the Louvre and famous landmark monuments such as the Eiffel Tower, Notre Dame and the Moulin Rouge. Its cuisine, fine wines and lifestyle attract visitors and property investors alike.
Paris is more than 2,000 years old, originally a fishing village on an island in the river that is the present-day Ile de la Cité - the centre around which Paris developed. By the end of the 12th century, Paris had become the political, economic, religious, and cultural capital of France. The Île de la Cité was the site of the royal palace. The Paris Region, or Île-de-France covers, 12,012 square kilometers (4,638 square miles). It has a population of 12.3m, or 18 percent of the population of France.

A port city on the Garonne River in the Region of Aquitaine-Limousin-Poitou-Charentes, of which it is the capital, lying within the Gironde Department in southwestern France. With a population of 1.1m it has its own Mayor.
Bordeaux is the city which has the highest number of preserved historical buildings in France, except for Paris. The historic part of the city is a UNESCO World Heritage site as "an outstanding urban and architectural ensemble" of the 18th century. Bordeaux is the world's major wine industry capital, home to the world's main wine fair, Vinexpo, given wines have been produced in the region since the 8th century.

The city gets referred to as "La perle d'Aquitaine" (The Pearl of Aquitaine), and "La Belle Endormie" (Sleeping Beauty) in reference to the old centre which had black walls due to pollution. This is no longer the case, however. Its inhabitants are called "Bordelais" (for men) or "Bordelaises" (women).

In the Auvergne-Rhône-Alpes region, and the capital of the department of Rhône, with a population of 2.2 million it is France's third-largest city after Paris and Marseille. Inhabitants of the city are called Lyonnais.

Economically, Lyon is a major centre for banking, as well as for the chemical, pharmaceutical, and biotech industries. The city is home to a significant software industry, with a particular focus on video games, and in recent years has fostered a growing local start-up sector.
The city is known for its cuisine, historical and architectural landmarks, as well as being a UNESCO World Heritage Site, with its famous Roman Amphitheatre. It played a significant role in the history of cinema: Auguste and Louis Lumière invented the cinematographe in Lyon. The city is also known for its famous light festival, Fête des Lumières, which takes place in December and lasts for four days, earning Lyon the title of Capital of Lights.

Chamonix-Mont-Blanc, or more commonly known just as Chamonix, is a commune covering an area of 245 sqkm (95 sq miles) in the Haute-Savoie department in the Auvergne-Rhone-Alpes region in south-eastern France. It was the site of the first Winter Olympics in 1924. Its population of around 8,900 swells during the Winter and Summer tourist seasons, given it is a year-round town, a base to enjoy Mountain life and not just a ski resort.

Chamonix is one of the oldest ski resorts in France. Its highest point is 3275 with 380 hectares of skiable area. The northern side of the summit of Mont Blanc, Western Europe's highest peak, is part of the village of Chamonix. On the south side, part of the commune of Saint-Gervais-les-Bains, it is a moot point as to whether it is Italy or France. Mont Blanc Tunnel, one of the major trans-Alpine transport routes, provides access between France and Courmayer in Italy. For Italy this is an important means of freight transportation to northern Europe. The 12 km tunnel, opened in 1965, reduces the route from France to Turin by 50 kilometres (30 miles) and to Milan by 100 km (60 miles).

Marseille, at the heart of Provence is the second most populous metropolis in France, with 1.7 million residents. The European Capital of Culture for 2013, its local economy hinges on Business Services, which accounts for nearly 20% of jobs. Without a doubt the city derives a large part of its economic strength from the activities of its port, which is the largest in France and the only port in southern Europe that offers multiple choices of transport via river, rail, road and by air.

Toulon is in the Provence-Alpes-Cote-d’Azur Region and capital of the Var Department. Over half a million people live in the Urban area, making it the fourth-largest French city on the Mediterranean coast after Marseille, Nice, and Montpellier. Toulon has a large military harbour on the Mediterranean coast and is an important centre for naval construction, fishing, wine making, and the manufacture of aeronautical equipment.

It is arguably the city in metropolitan France with the most sunshine per year: with an average of 2,856 hours a year (more than Nice at 2,695 hours). A key reason is the wall of mountains that largely protects Toulon from the weather coming from north.
Toulon’s train station has regular services to Marseille (1 train every 15minutes during rush hour), Nice, Paris and regional destinations. The port of Toulon is the main port of departure for ferries to Corsica. The nearest airport is the regional Toulon-Hyeres Airport.