A single Western Woman in Morocco

When I started dealing with Moroccan property I wanted to see the property developments, but also get a feel for the real Morocco. So in an action-packed week, c.1400 km, 4 flights and 2 boat trips later, this is a little bit about what I did.........

Getting to know the Morocco Property Market more intimately

Let me introduce myself, I am an agent helping people buy property in Morocco. When I decided to get involved, I not only wanted to see the property developments, but also to get a feel for the real Morocco; its culture, lifestyle and people. So in an action-packed week, c.1400 km, 4 flights and 2 boat trips later, this is a little bit about what I did…..

I flew to Malaga, ready for an early morning flight, with the new service operating to Nador. This was impressive, almost like flying in a private jet. It didn’t take too long to get through passport control, to be greeted by the car rental agent at a pre-arranged time, to take possession of my car. She took care to make sure I understood the contract and charges, in a surprisingly lucid manner, given it was 6.45 in the morning. Although she did ominously ask if I had ever driven in Morocco before and warned me to be alert. Quite rightly, as it turns out. It is either the Moroccan way, or development has come at such a fast pace for Moroccans, that pedestrians seem to wander in the road as though it were a pavement, completely unfazed by the presence of moving cars. That’s without having to contend with driver behaviour, where the lane driven in, sometimes seems to be a mere matter of choice, rather than an accepted code of motoring conduct.

I was advised there was a decent hotel, an hour away in Oujda (until the opening of the 4* & 5* hotels on site this Summer). At the time this seemed like a long haul, but it did in fact give me a chance to glimpse the typical Morocco.

On my drive, I was struck by how green and lush the countryside looked (although this is April, so Summer, may dry it somewhat). But I don’t think the seasons change the lifestyle. Out in the countryside it was wonderful to see the shepherds herding their flocks of sheep and herdsmen tending their cattle. It was also intriguing to see so many people on foot, either going to work in the fields or the children going to school in nearby towns.

Modernisation is however, slowly creeping in. I was bemused to see a shepherd rounding up his sheep, whilst happily talking to a friend on his mobile phone. Not a sight I have come across before. The old traditional customs interrupted by the new and modern. 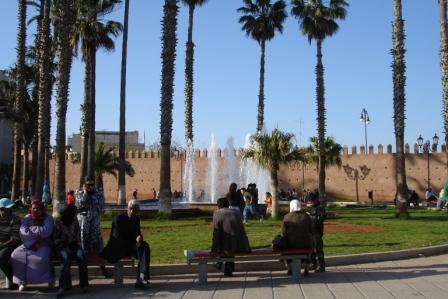 In Oujda I wanted to explore and so went to the Kasbah (walled residential quarter around the medina/city). Apart from the interesting, old, crumbly buildings, I was taken with the children playing “cache cache” (hide ‘n seek) as they would anywhere else in Europe. I had also prepared to be hassled, but was surprised that this didn’t happen as much as I was expecting. Many people looked inquisitively at seeing a Western woman in the traditional Moroccan towns and cities, but this was more out of curiosity, than anything threatening. I was brought to reality with a jolt though, when I wanted to relax with a “thé à la menthe” (mint tea), so much a part of daily Morocco. The first café I passed was full of men and not a woman in sight. After passing the 5th uninviting café, I decided to drink in the more relaxed surroundings of my hotel. Evidently there are some boundaries that differ between continental European norms and a Muslim nation.

The antithesis to this though was at Saïdia, which in contrast has quite a cosmopolitan feel. Local women and foreigners happily mingle in the restaurants and cafés, without any of the staring that can be found in the more traditional towns. What I have since learned in Tangier is that, some women may go to cafés, but they tend to be in more hidden areas and so are not easily seen from the streets. 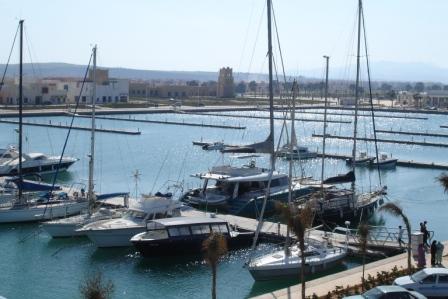 The sheer scale of what is being created in Saïdia creates a significant impression. The opportunity to own a beachside property, in such a beautiful country, with such fabulous golden, sandy Mediterranean beaches is unparalleled. The Moroccan beaches are the mirror image of Spain’s but without all the same level of development. It certainly has a magnetic pull.

From the Saïdia-end of the Mediterranean, I wanted to see the other end and Tangier was calling. I drove to Melilla–the Spanish enclave-to catch a flight back to Malaga. Now that was a none-too-savoury experience. Emerging from quite a presentable town environment of Beni-Enzar, to the border control, was a shock to the system and more like driving into a shanty town. I have since learnt this is a far worse crossing than the border at Cueta (or Sebta as the Moroccans call it) into the other Spanish enclave. I had decided early on that the trip by road to Tangier from Saïdia was going to be too long and mountainous for me to travel alone. So my best bet was to travel along the southern Spanish coast from Malaga, which has a much quicker motorway. This will all change, but as Saïdia is still getti

ng established on the map, that is how it is for now. In time more flights will go into Oujda (40 minutes away) and open up access considerably as tourists get to know of Saïdia.

This was a completely different experience again. The buzz and hubbub of city life creates an exotic feel at the 1st steps off the boat, as it arrived from Tarife. Tangier was my base to explore the Western part of the Mediterranean and to see a contrasting Plan Azur development on the Atlantic coast, which was not nearly as progressed as Saïdia.

I was pleased to have seen the old and modern of Morocco on my trip. What struck me was the amount of development going on, momentum not in the least bit dumbed down by the slowing world economy. Morocco receives EU funding as well as investment from the Middle East, where nations see it as its bridge to Europe. I certainly felt it was that.